Eighteen groundbreaking projects covering the innovation and progression of many of Angie Scarr’s polymer clay techniques, which are now standard in miniature food making today.This part is a look back at the “Challenge Angie” series of articles from 2000-2001 in Dolls House & Miniature Scene magazine. A chance for a newgeneration to see these originals, now long out of print, all written in Angie’s slightly irreverent style.“Angie is a true pioneer and one of the first people to lay the foundations for miniature artists who discovered polymer clay at a later date. Not only is she an expert demonstrator and designer but also a lovely personality who puts at easethose willing to give it a go, even people who have never even heard of polymer clay before.” Birdy Heywood.Also available as an ebook via Amazon, in several languages.

There are no reviews yet. 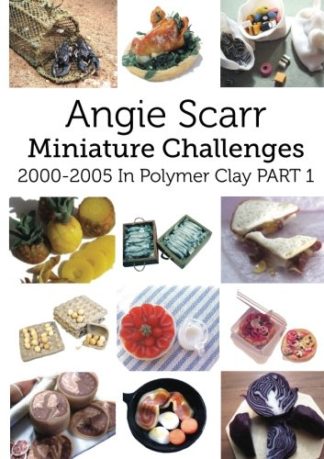